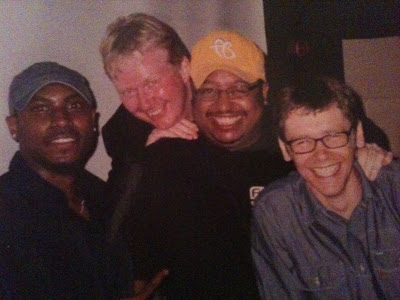 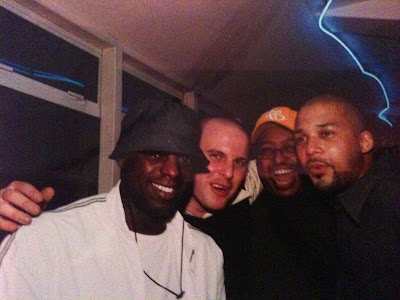 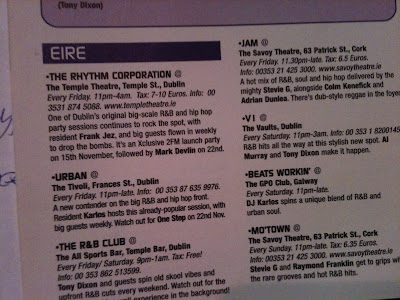 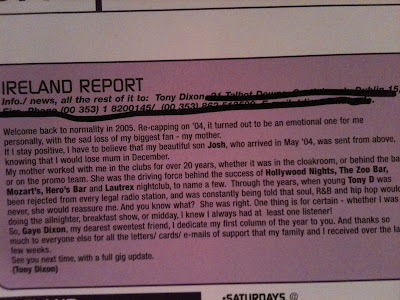 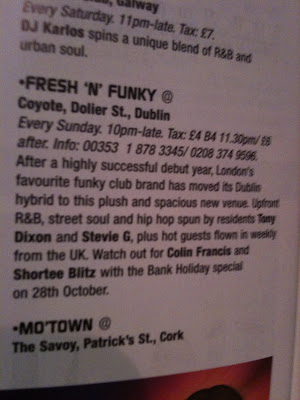 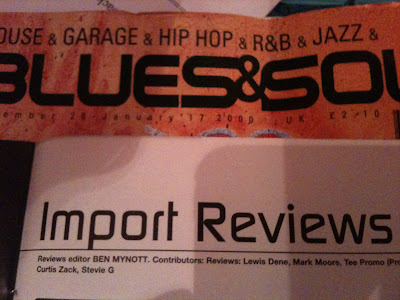 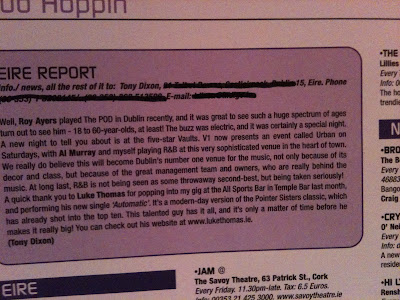 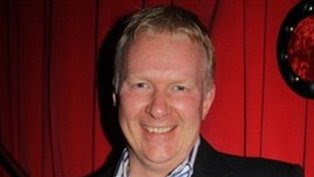 It only seems like yesterday that I did a tribute here to New Jersey producer Tony D who died tragically last year. Well sadly tragedy struck again this morning when another Tony D, known to many as Tony Dixon, died in Dublin after a short illness. Myself and Tony go back to the 90's but it is fair to say he has been pushing soul music in Ireland for a lot longer than that. Here is a quick career summary from RTE's website

"Originally from Pinewood on the Northside of Dublin, RnB DJ Tony Dixon began his radio career working with the 'Big D' pirate station in the '70's.
He was known affectionately in the music industry as a member of the 'Northside mafia', a group of high profile presenters including Ian Dempsey, Tony Fenton and Gerry Ryan who all grew up together and went on to forge distinguished careers on both national and local radio.
In the '80's he moved to another pirate station, 'Sunshine Radio' before managing the popular nightclub 'Hollywood Nights' at the Stillorgan Park Hotel.
Tony joined Dublin radio station, FM104 in February 2000 presenting his Hip Hop and RnB show every Saturday night, where his catchphrase was: "If it's Hip Hop and RnB, don't miss me, Tony D".
He also worked as a sales consultant for the station.

Tony is survived by his son Josh, his son's mother Dee and his three sisters and two brothers."

Personally, I met Tony in the late 90's and early part of this decade when we were both residents at a club called Fresh N'Funky with the wonderful Gilly Robinson at the helm. This club later ran at the Coyote Lounge on D'Olier St but started out it's Irish residency in HQ

"We launched ourSunday night residency with DJ Swing, at the HQ club in Dublin, a city at the heart of Ireland’s thriving club scene. A stunning live performance from Damage and DJ appearances from Trevor Nelson, Shortee Blitz, Brian Norman and Chilli Source alongside resident DJs Tony Dixon (FM104) and Stevie G ensure this night continues to grow in popularity and establish itself as a must for all Dublin R&B lovers!

Fresh’n’Funky were approached by one of the most stunning venues in Dublin - the Coyote Lounge. So in June 2001 Fresh’n’Funky moved to its current home where it continued to thrive every Sunday night."

I got to know Tony quite well as we were also columnists together at the legendary Blues and Soul magazine (Tony looked after the Irish side of things, on which i assisted him the odd time with news of Cork and the rest of the country; I also did Import reviews). I've included a few snippets including a moving piece Tony wrote about his Mum when she died.

Even though we were of different generations and backgrounds, Tony always struck me as a genuine guy who despite being 100% slick in public and on air, would also be very helpful behind the scenes

On a personal level, he helped me with a demo I made for RedFM back in about 2000/2001, when they were about to come on air in Cork. He helped give me advice that smoothed a transition from pirate radio and as we all know Tony knew a lot when it came to presenting a specialist show. Nearly 10 years later my show is still running and I thanked him personally the last time we met for his assisstance. In 2002 My Black on Red show won best Irish specialist music show at the PPI awards and I also thanked Tony for his influence in that terrific achievement for the music we loved. His legacy on the airwaves in Dublin extends over a lot longer and it's great to see him being recognised by his peers over the years and especially today.

He will be sadly missed, and from myself and my colleagues in Cork, to the London/UK gang like Brian Norman, Colin Francis, Shorty Blitz, Firin' Squad, DJ Swing, Gilly Robinson, Trevor Nelson, Dodge, Steve Sutherland, Ronnie Herel and more, let it be noted, that Tony was loved outside Dublin too. DJ Swing was another who left us too early (tribute here) The likes of Frank Jez and co in Dublin will carry the torch forward aswell, and there were many more names i got to know over those years with Tony and co. In recent years I became disillusioned with the more charty r&b side of the club scene and one of the final straws was when a girl came to the DJ box in Coyote Lounge and asked us for "some real R&b like Britney". Tony and myself laughed at this. Even though i was much younger, Tony always acknowledged what i was trying to do by bringing the heavyweight soul of Aretha, Marvin and Stevie Wonder into the modern dancefloors that sometimes thought r&b and soul started in the late 90s. Tony knew well because he had been holding it down himself for years and he did more than practically anyone in Ireland for soul music of all different shapes and sizes. It was an honour to know him as a friend.

I broke the news to one of the best known names of those gigs today and Trevor Nelson rang me in disbelief aswell. Having not known he was sick I was also taken by suprise that a person so bubbly and full of life was being taken from us.

"Really sad to just hear about the passing of Tony Dixon.a true pro and 1 of irelands best r&b radio djs.had many great times with him"

My deepest sympathies are with all his family and friends