A new era for Brass Bands! 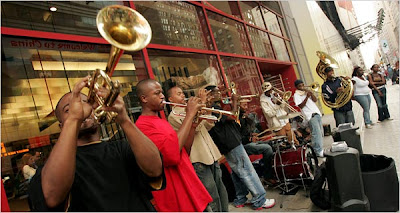 The history of brass bands in American music dates back to the late
19th century. In New Orleans the blues and jazz era ushered in a
massive phase in the development of such bands, and I’m delighted
that a new era of such bands has come about lately, with many of
the new acts taking their cue not just from jazz and blues, but
soul, funk and hip-hop too.
This may seem like a break with tradition but
to be honest, as with most big developments in hip-hop and jazz, it
is simply a natural progression and development of a music styles
that are quite complex in their backgrounds. Modern day hip-hop
owes it all to jazz, blues, soul, funk, reggae and more, while jazz
itself considers to absorb and integrate new music into what some
people consider the essence of it’s original form.
What some jazz purists and traditionalists should
bear in mind when they put down hip-hop and new forms of music, is
that most of the major pioneers of jazz found themselves being
questioned back in the day when they departed from the traditions
and created something new. For many years the young brash arrogant
Miles Davis used rail against what he felt was the stale tradition
of Louis Armstrong and his ilk, but it was only when Miles himself
felt the sting of criticism about his own material that he
appreciated that Satchmo was a pioneer who blazed a trail that
paved the way for all jazz musicians. Ironically, Miles ended up
being even more single-minded from then on in pursuing his own
vision of a music form that had no boundaries.
Back in 2008 you may well be asking me who the hell
are all of these new bands I’m telling you all about? Well, you
don’t have to so much digging anymore because a quick search on
youtube will show you some of the greatest exponents of modern day
brass band flavour! The Youngblood Brass band will be familiar to
many in Cork, having played a blistering set here a few years ago
at the Cruiscin. Breakestra are the same, and the West Coast funk
group also played in Cork, as did Leeds outfit the Nu Mastersounds.
The Dap Kings are making big waves in modern soul and hip-hop, and
Mark Ronson has utilised them heavily in his productions that have
brought himself and Amy Winehouse great success. Meanwhile, the Hot
8 Brass band from New Orleans have are winning fans from all over
the globe with their jazzy takes on hip-hop and soul standards,
while the Dirty Dozen Brass band have collaborated with everyone
from Chuck D to Guru in their short career lately, and they have
been holding it down now for over 30 years! The Rebirth are an L.A.
crew who also played Cork, while we will also be getting a visit
soon from my favourite brass band of the moment, the Hypnotic Brass
Ensemble, Jay Z’s favourite band, and a group who are even as we
speak helping put together the new Gorillaz album!

This article by Stevie G originally appeared in his Downtown Column in the Cork Evening Echo
Posted by StevieG at 8:16 PM 1 comment:

Da Beatz at the Peace Park! 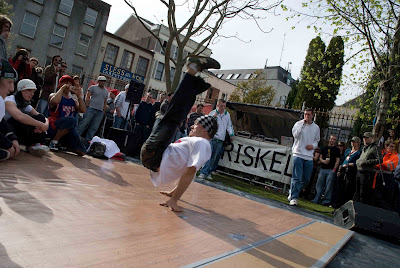 April was always gonna be a month full of rain but once again we
got lucky last Saturday when Da Beatz held their second annual
music showcase in Bishops Lucey Park as part of the World book
Festival. Again, the Triskel and all the sponsors did a fantastic
job in bringing together a fantastic line up of young singing,
rapping, djing, beatboxing, break-dancing and graffiti talent. The
sun even came out in force at one stage during a break-dance set by
the Rhythm Rebels/Zombie crew, and it is fair to say the hip-hop
gods were smiling on us for the evening!
Speaking of which, I wanna congratulate the
Rhythm Rebels and Zombie crew who are going over to represent Cork
and Ireland this summer in the World Breakdancing Championships in
Las Vegas this summer. These guys have been at the forefront of the
scene here in Cork now for ages and it’s great to see their
hard work being rewarded! Last Saturday was a superb showcase of
not only their talent, but of everyone involved. The rappers,
beatboxers and MC’s and singers are too numerous to mention,
but special mention must go to White Noize, Ciaran O’Regan,
Samir, Jaz, Bony, Mickey Gatch, Brozy, Nash and co, who all tore it
up. Ophelia was down as part of the Ladyfest celebrations and she
provided an incredible counter-balance to the predominantly male
macho vibe with a blistering set of hip-hop and soul accompanied by
DJ Mosschops!
There are so many people to
thank and both the World Book Festival and the Triskel did a
fantastic job, with Chloe of the Triskel tying the whole thing
together. Parkers Home Value and Cool C of All City deserve great
credit for their input and support, and Cork Graphic and Print of
Cook Street were also great in supporting an event that was
entirely free. The amount of tourists and passer-bys that came
along was great and it was fantastic to see people of all ages,
genders and races enjoying a free show in the Peace Park. Cork City
often under-sells itself but events like this are tremendous in
showing a side of youth culture that rarely makes the newspapers or
talkshows. Already, it looks as if Da Beatz are gonna be following
both this and our recent visit to Liverpool with some more big
events so keep an eye here for more details.
Ladyfest also ran a
successful all-ages gig last week and I’m delighted that the
young ladies of Coolaboola are celebrating their 3rd Birthday in
the soon to be opened Pavilion this June with another top class
line-up. With both Spitvalve and Mucky’s Wall ensuring that
Cork has once again got a big chance in the next Blastbeat final it
looks like the scene in Cork is only gonna get better in the next
few years. The youngsters of Cork are definitely giving us a hint
of some of the great things that could soon be in store!

This article originally appeared in Downtown of the Evening Echo last week
Posted by StevieG at 9:38 AM No comments: